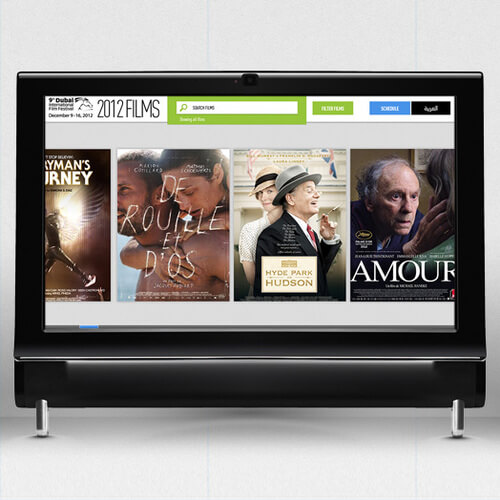 Prototype was chosen to redesign the website of the Dubai International Film Festival that would include new design and capabilities.

In 2012, Prototype was appointed digital communications agency for the Dubai International Film Festival (DIFF), only two months before the 9th annual festival got underway.

‍Now a major international festival, DIFF had outgrown its website's capabilities and the site had dated, no longer reflecting the festival's objectives. Our first tasks included the re-design and development of the DIFF website, a touchscreen application, and digital marketing deliverables, such as banners and an e-newsletter.

The task of building the DIFF website was split into a further four distinct parts:

At a technical level, the job involved improving site performance, including remaking design decisions from the previous site design, mainly because the design didn't follow the DRY principle (Don't Repeat Yourself). For example, templates which were split into 6 files for Arabic & English, in multiple instances throughout the CMS, were consolidated into a single file.

We had to re-factor a majority of the code – modules that were created for the screening schedule & film database were redesigned to perform faster, and be more customizable and robust.

A lot of the SQL code was rewritten to use proper indexing and reduce memory usage. This had the effect of reducing load on the database, freeing up CPU and enabling the website to handle more requests & users.

And it was crucial that we could deploy the website with one command so there'd be no disruption to the site. We used software development tools Capistrano and Git to manage the deployment process – with only three words at the command line, we were able to have a new version of the website up & running in a matter of minutes.

We designed all digital assets based on the supplied brand guidelines, for
a modern design that would allow users to access the vibrant and fast
changing information in a convenient way.

The touchscreen application was placed in front of cinemas for users to browse the film catalogue. The bilingual app featured a modern, HTML5 based touch interface. Using simple animations, and a thoroughly tested UX, the app received positive feedback from festival goers.

We enhanced site usability with a more user-friendly film schedule, and a new shopping cart so patrons could purchase tickets directly from the site. This year users could also create a personal schedule to plan their festival experience, and share and invite their friends.

In addition to the digital marketing assets we designed to help promote the festival online – the banners and e-newsletters – we re-designed DIFF's internal management system for cohesive branding, and improved usability.

There are common elements shared across the three sections such as news, an archive of previous editions of the festival, and various other top-level pages.

Site users can now browse film information by filter, such as genre, language, country and programme, with detailed information provided, from cast list to film stills.

A tremendous amount of effort was put into making sure that the film list on the website could be kept up-to-date as new information arrived, that all systems were synchronous, that the screenings schedule was easy to read, and that from here film tickets could be added directly to a shopping cart.